367 votes for to 146 votes against: That’s the end result of last night’s impeachment voting against the current President Dilma Rousseff. Thus more than two thirds of the deputies of the câmara, the Brazilian Congress, decided for the impeachment. Just 172 votes against the dismissal would have been enough to stop the ongoing procedure. But for quite some time Rousseff already touts to win the deputies’ favor – and of the electorate, too. In a survey last week, just about ten percent of the interviewees stated that they still believe in the current president and their party, the Partido dos Trabalhadores (PT). A historic low for this party which has decisively influenced the political landscape of this Latin American country after the end of the military dictatorship in 1985.

“Due to this circus I hope that you have understood the importance of electing a deputy.”

What comes next after this historic and likewise destructive congress vote is the decision of the senate. The senators can take up to 24 days, until May, 11, to decide whether to initiate the impeachment procedure. But just a simple majority is required. This means that 41 out of 81 senators have to agree to the request to release Rousseff from office for 180 days. During this time, it will be proved if the allegations in the case of the “pedaladas ficais”, the adjustment of the state budget, are true. Rousseff is accused of massaging figures in the state budget 2015 and keeping guessing the lenders, including banks, about the financial problems. For the political camp of the PT and its supporters, the whole impeachment procedure is a “golpe”, a coup, of power-hungry politicians who want to take over the highest office in Brazil, waiting for months for a moment of weakness to finally get rid of Rousseff. Under the appropriate slogan “Tchau, querida” the Partido do Movimento Democrático Brasileiro (PMDB) haven’t hidden the fact what of what they are really up to. After the 13-year dominance of the PT they want to have a president of their own.

“54 Million people voted for Dilma but 400 white and rich man will take it away in the people’s name.”

The impeachment was initiated by the president of the congress, Eduardo Cunha, who said that he merely wanted to put an end to the dissatisfaction among the deputies. But his opponents accuse the conservative Christians and PMDB politician with greed for power. Because if the current Vice President Michel Temer, who is the chairman of the PMDB, can’t accede the interim presidency, the congress president assumes this position in turn. A farce in view of the fact that Rousseff is accused to be corruptive, but Cunha himself was deeply involved in the Lava Jato scandal. Therefor the Swiss federal court brought charges against him because of money laundering and large-scale bribery of public officials in the year 2015. Similarly, the so-called NGO “Movimento de Combate à Corrupção Eleitoral” (MCCE) could find out that the PMDB was the party with second most corruption cases over the past decade after the Democrats. Overall, the mandate of 66 politicians of this party were unseated due to criminal entanglements between 2000 and 2010.

“Apparently, the motive of the impeachment of Dilma is that she doesn’t like that much the deputies’ families.”

Corruption is only one of many problems which the PT supporter see in the potential interim ruling party. Because its flagship politicians, with Cunha leading the way, are largely regarded as misogynist, racist, fanatical and homophobic. Because in no other Brazilian party there are as few colored and female members as in the PMDB. In 2011, Cunha even tried to board for signatures for the so-called “Dia do Orgulho Heterosexual”, a day honoring the heterosexuality. Without success. Yesterday Glauber Braga, a PSOL deputy, while voting against the impeachment vented his spleen against Cunha: “Senhor Eduardo Cunha, o senhor é um gangster. O que dá sustentação a sua cadeira cheira a Enxofre. Eu voto por que nunca aqueles escolheram o lado fácil história da. Voto por Marighella, por Plinio de Arruda Sampaio, por Luís Carlos Prestes, eu voto por Olga Benario, eu voto por Zumbi dos Palmares, eu não voto.” (” Mr. Eduardo Cunha, this gentleman is a criminal. The substance, wat your chair smells of, is sulfur. I vote for those who have never chose the easy side in history. I vote for Marighella, for Plinio de Arruda Sampaio, for Luís Carlos Prestes, I vote for Olga Benario, I vote for the Zumbi dos Palmares, I vote for no.”) 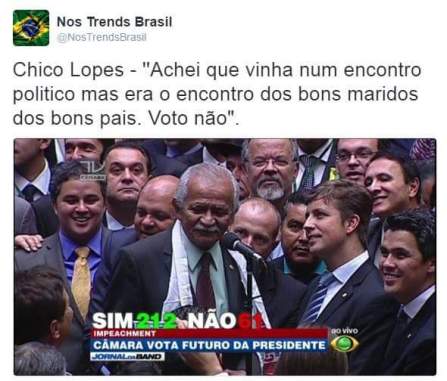 Chico Lopes: “I thought that it will be a political meeting but it was a meeting of good husbands and good fathers. I vote for no.”

If one has a close look at the Brazilian Congress, it is so obvious that those representatives of the people don’t represent the people at all. On the contrary, it’s an accumulation of white, heterosexual, male Brazilians of the upper class, which usually have a good family background and have absolutely nothing to do with the 30 million people in this Latin American country who are still affected by poverty according to the UN. For these people the PT is a safe haven, Bolsa Família is believed to be the token program of combating poverty for the underclass. And for them, yesterday’s vote was also a slap into their faces. Because Rousseff and her predecessor Lula are role models for them, who even managed to get out of poverty and are viewed as members of the new Brazilian middle class.

“Bolsonaro exalted the colonel who tortured a young woman of 23 years one day who later was democratically elected the president and he (Bolsonaro) was cheered up for voting ‘yes’ against her. If you don’t realize the risk of all this, it’s because you have chosen the blindness.”

But the worst of yesterday’s votes were the arguments put forward by those MPs who voted with a “sim” for the impeachment. It felt like as half of them mentioned as a seemingly argumentative gambit the future of Brazil, of their children or of their grandchildren. Others spoke of the grace of God or a divine dispensation. In a political context, race, sexuality, faith and family shouldn’t neither be used to make a political decision nor be mentioned as a constructive argument by an elected deputy who earn more than 3,800 euros a month and hasn’t much more to do than to think about convincing the population of his/her person. By many critics rightly described as a shame, because no one of the 513 deputies came to speak about the “pedaladas ficais” in the argumentations in any way. The only argument that pointed somehow into this direction was the wish to end the corruption. And this said by those who committed crimes on their own or were suspects in those. A few examples: The PMDB deputy Pedro Paulo admitted that was repeatedly beating his ex-wife. Against Beto Mansur, PRB deputy, an accusation of child labor has been dropped in the year 2015. A third case is about the pastor and PSC deputy Marco Feliciano who is criticized for years due to his very controversial views on homosexuality, the women’s movement and Afro Brazilians in the criticism. Even some cases against him were filed.

One of the last voting deputies on yesterday’s evening was Jair Bolsonaro, deputy of the PSC, who pointed with his statement “Perderam em 64 e perderam agora em 2016” (“You lost 1964 and you lose also lose now in 2016”) to the military coup in 1964 alluded. Furthermore, he dedicated his vote to Carlos Alberto Brilhante Ustra, ex-head of the DOI-CODI in São Paulo, an organization that was responsible for the torture and murder of numerous civilians during the military dictatorship: “Pela memória do coronel Carlos Alberto Brilhante Ustra, o pavor de Dilma Rousseff.” (“In memory of Col. Carlos Alberto Brilhante Ustra, the horror of Dilma Rousseff.”) The most controversial point in this statement is that he mocked Rousseff who was a victim and prisoner of the military officers in the extreme in public. And this was celebrated by Rousseff’s opponents. That was just the bitter end of a very bitter evening for all PT supporters who hope for the senate’s rationality now. But considering yesterday’s ostentation of arrogance, a lack of political expertise and greed this is very doubtful. What will occur, is a 180-day dismissal from office for Rousseff. If no criminal accusations can be proven and an absolute majority votes for it, she can resume her office as the Brazilian president. By then, Brazil will probably be divided into two political camps.