Even before the 2014 FIFA World Cup in Brazil there were numerous reports on the Latin American country. Scandals of unfinished venues, the systematic cleansing of the favelas and the weekly manifestations of football opponents dominated the headlines as well as the anticipation of the upcoming event. Because the country of the five-time world champion is considered a football nation par excellence. No other sport is as popular as this field sports. And that has its reasons. Football isn’t just a sport for many Brazilians. Rather, it’s a religion that they celebrate every weekend in bars or in the stadium with a Skol in the right, a waving flag in the left hand. The cantor strikes up the fan chant accompanied by samba sounds and the mass choir of uniform-clad “torcedores” (fans) joins in singing vociferously. Each ball movement, every referee decision and every foul is followed by the human avalanche, fraught with tension and emotional outbursts. Hate speeches of the opposing team included.

In 2013, I was able to get a read of the “torcidas organizadas”, the organized fan groups in Brazil. Together with my host sister and her family, I went to the Estádio Raulino de Oliveira in Volta Redonda, a town in the north of the state Rio de Janeiro. On that July evening the legendary Clube de Regatas do Flamengo played. Flamengo – as Brazilians call the football club – is one of four major football clubs in the metropolis Rio de Janeiro, which has the largest fan base in Brazil with about 40 million followers. The stadium shone in red and black colors because three of four stands were taken by Flamengo fans. The fourth tribune was reserved for the opposing club. Indeed, I could feel rivalries between opposing torcedores but there was no fight at all That’s a rarity in Brazilian football. Because the South American country is known for its temper and passion for football. 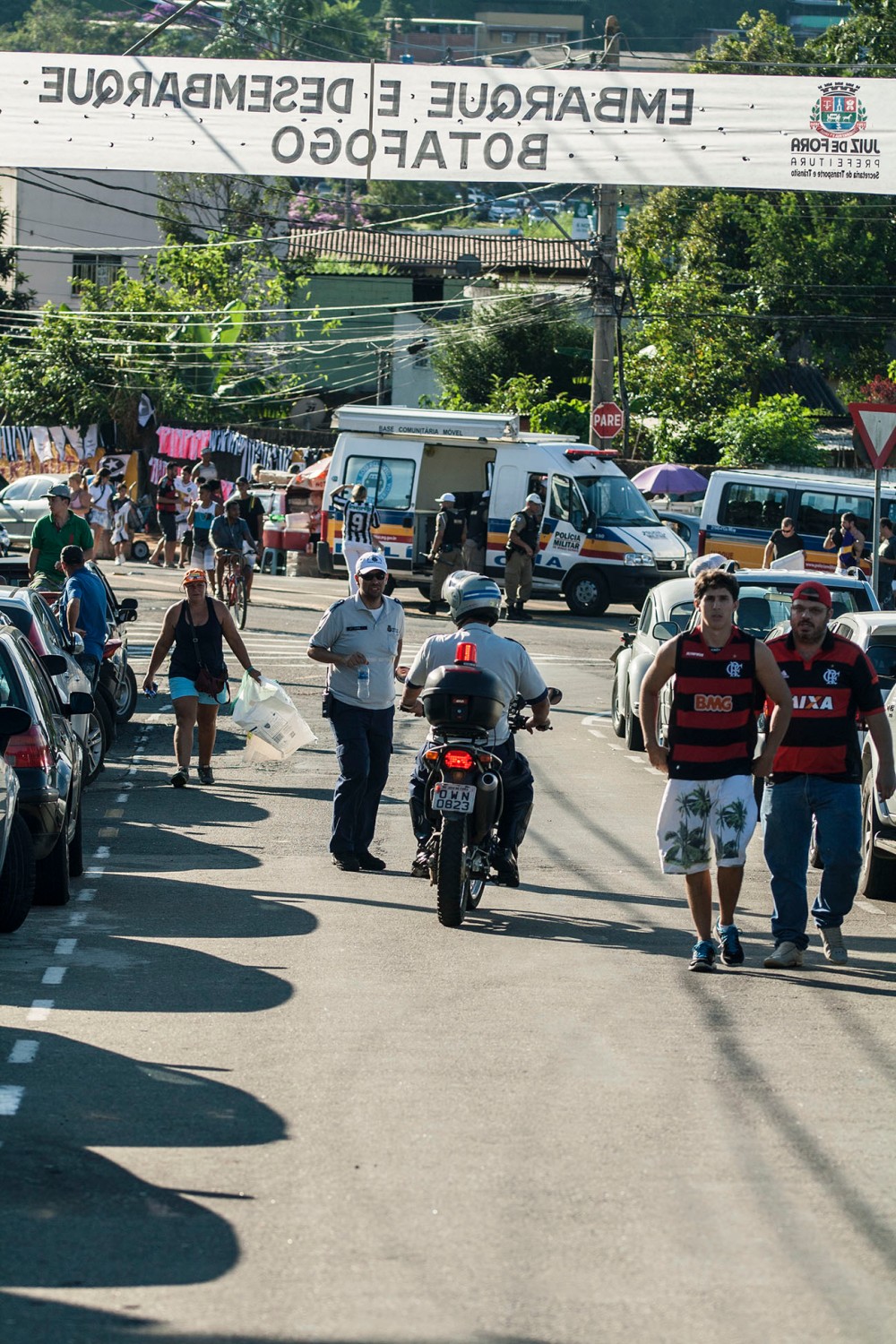 For example, last weekend a dispute between football fans of the rival teams “Sociedade Esportiva Palmeiras” and “Sport Club Corinthians Paulista” ended up in a murder and at least 25 arrests. An innocent pedestrian came under fire and was shot on the street at broad daylight. The police found bloody batons, knives and other weapons along the arrested people. That Palmeiras won 1 to 0 is probably just a side note in the light of such violence. But this is only one of many examples. Another tragedy occurred already on 13/06/2013 during an amateur game in Pio XII in the northeastern state of Maranhão. The 20-year-old referee Otávio Jordao da Silva sent off the footballer Josemir Santos Abreu whereupon he protested loudly and kicked the referee. The dispute escalated within seconds: Otávio took a knife and stabbed Josemir. On the way to the hospital he died. As the family members of the soccer player got to hear of the death, they charged across the field, stoned Otávio to death, cut off his limbs and his head and impaled his head on a stake. Three people were arrested subsequently, but they denied to have anything to do with Otávios’ death.
The sad list of the most violent football clubs in Brazil is led by Palmeiras, whereby the fans of Corinthias committed most murders in 2012 with 13 verifiable victims. Furthermore, in the state of São Paulo occur about half of all violent incidents between “torcidas organizadas”. Due to the radical fan groups the stadium rules were drastically tightened before the FIFA World Cup in 2014. Neither the entrainment nor the sale of alcoholic beverages are allowed anymore. The torcedores have to watch the soccer game without their beloved cerveja. The bag check for weapons or illegal substances is routine by now. Likewise opposing fan groups are divided into several blocks and the police presence has increased steadily, by what the violence should be reduced. But it just worked partly. Because now the rivalries relocate to the streets. A sad incident occurred on April 19, 2015 when unknown people stormed the club house of the Corinthians, “Pavilhão Nove”, with guns and executed eight club members in cold blood. Even I could get an idea of the fan dynamism and the violence. 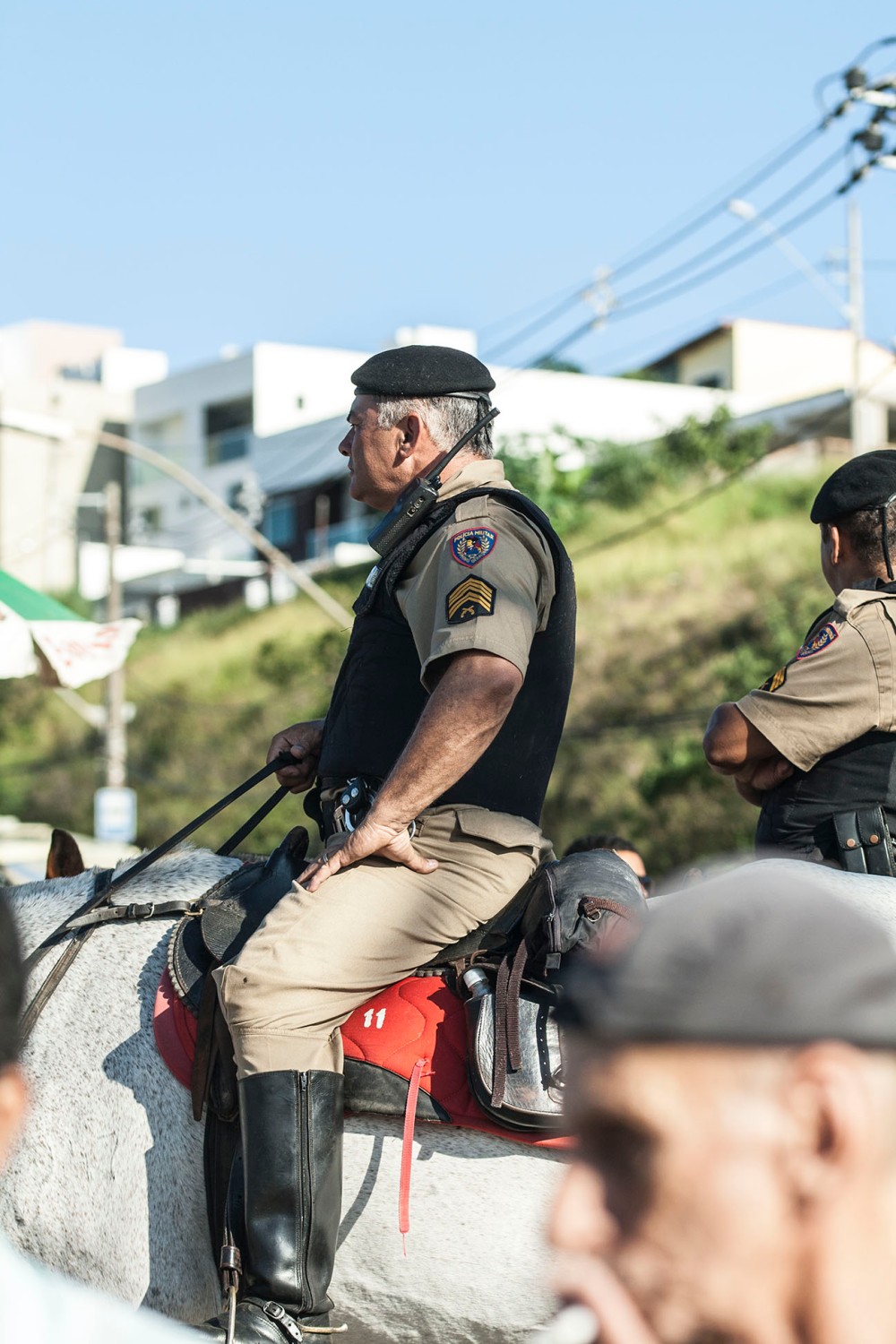 Last Saturday my Brazilian and I took a bus to the Estádio Municipal radial Ista Mário Helenio in Juiz de Fora to visit his family’s garden, which is located in same bairro, just 300 meters far away. The bus was crowded with Flamengo fans, who simmered the match against the archrival Botafogo. Initially, nothing seemed to indicate what would happen later. All people were relaxed; one man even drank a Brahma on the ride. But as we approached to the stadium and cars lined up to a huge queue the torcedores got increasingly angry. They started to offend passing pedestrians and opposing fans through the open windows. Some already went to the door in the hope to finally disembark. But it wasn’t like easy. Because the bus still had to go about 400 meters. Reason enough for the torcedores to annoy the bus driver with with “abra”( “open”) calls which became louder and more aggressively meter by meter. An escalation was in the air. The scenery of insults turned into an avalanche of confused shouts. A torcedor had even a gab about the bus driver with the cobrador, the cashier at the bus. But both ignored that incident and followed the route to the last stop. Once there, the torcedores jumped out of the bus as red-black-masked, crazed animals. Because finally they could pilgrimage down the hill to their shrine, the stadium. 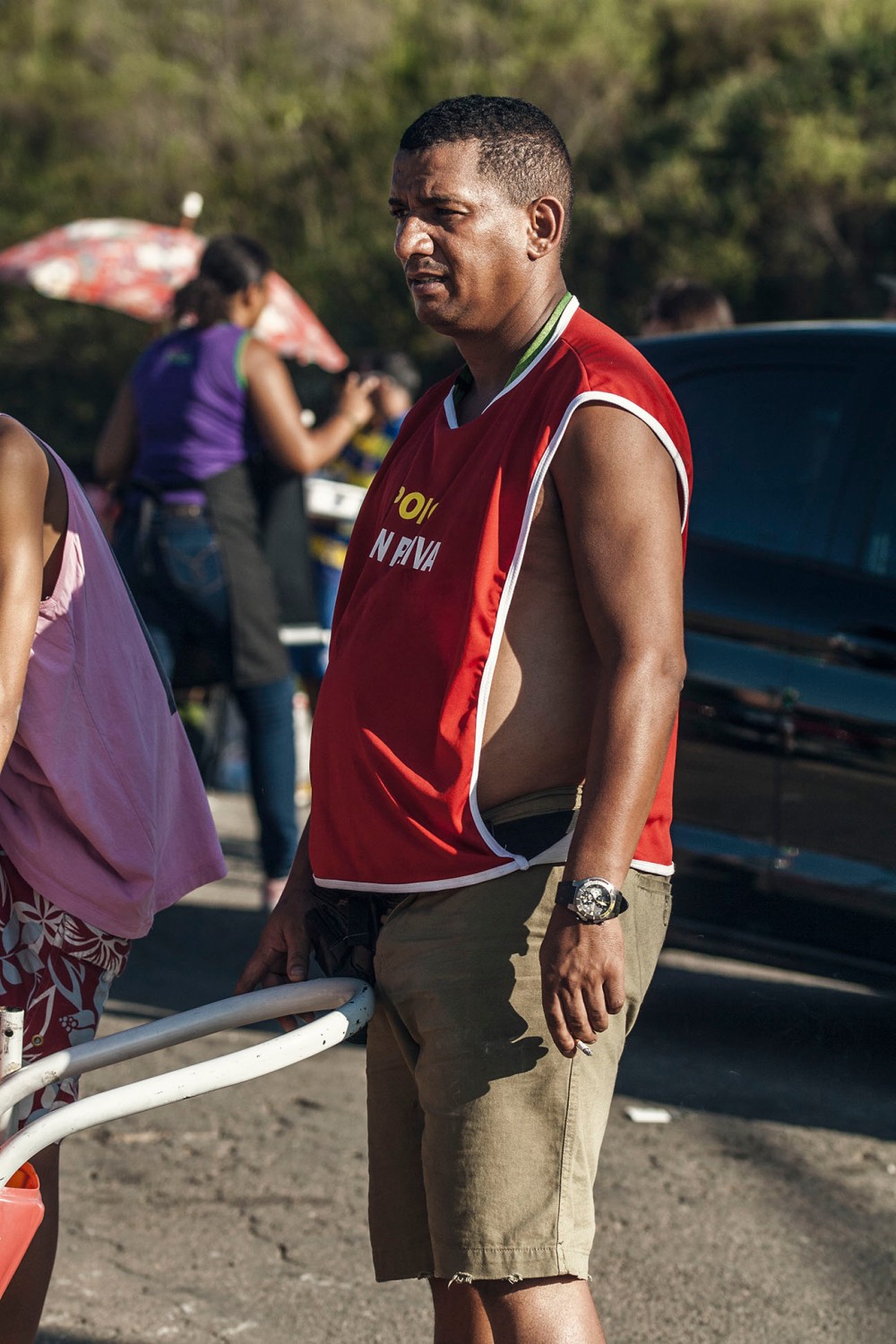 We also left the bus and hit the road to the garden. We observed how the stadium slowly turned into black and red. The lower presence of the Botafogo fans with the traditional black and white jerseys was very noticeable. The polícia militar eyed the torcedores suspiciously, on foot, by car and even on horseback. It’s very common at such mass events that the Brazilian police backs on the four-legged support. As we strolled down the hill slowly, we met my Brazilian’s family. After a brief welcome we heard a mob of black-white-clad Botafogo fans coming closer, followed by a dozen policemen. Instead of taking the “entrada Botafogo” (entrance Botafogo), some of the torcedores ran directly to the “entrada proibida” (the forbidden entrance) which was only reserved for Flamengo supporters, in the hope to catch up a fight. The policemen, equipped with batons and shot guns, followed them. One of them already started to count to three and wanted to use the baton as the torcedores had second thoughts and marched to their entrance. This scene took place just a few meters away from me. Of course, I snapped a few pictures. Something that the Brazilian police doesn’t like to see with their often very aggressive crackdown on resistance fighters, football fans and criminals.

But that wasn’t all. Because after the game, the rivalry kicked off again. After leaving the stadium the hostile torcedes started to fight on streets. The police even had to request a helicopter for aerial surveillance. A siren after another shrilled at the sun set and didn’t bode well. But nothing is known about injured or dead people. Just several suspects were arrested for sobering up and questioning. One of them, a 17-year-old is even suspected of having stolen 11,500 Reais from the ticket sales at the stadium.

As one can see, the violence in the Brazilian fan culture isn’t pulled down and occupies a top position in the mondial murderers and casualties of football fans with more than 50 deaths. A sad top position.